“At her first bleeding a woman meets her power.
During her bleeding years she practices it.
At menopause she becomes it.”
Traditional Native American saying

Maid, Mother, Crone, Other – This title has sat for so long in my consciousness it feels almost like a mantra. The three stages of a woman’s life, plus that nefarious “other” that as women we are destined from birth. All four at times used against us, but by reclaiming them, by owning them, we can harness that power. We are taking it back.
Sometimes I have taken these words literally and temporally (the maid poems were all written before I had children), sometimes they are labels to explore a general concept. 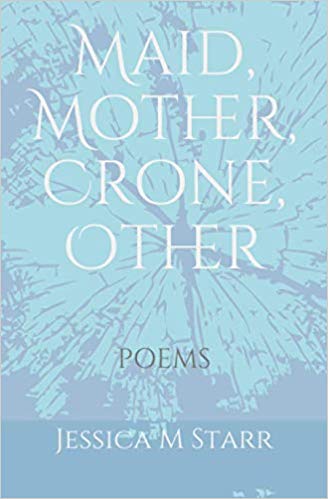 “Maid” either the time from birth to fertility/ menarche, or, from menarche to pregnancy. And a term used to hurt and label women who are older and single. Here you will find poems about what it feels like to be a child, making mistakes, learning about the world and loving the people around you.

“Mother” most obviously the phase of life where we bear children, but what if we don’t? What about women (born or identified) who do not birth offspring? For me Mother is a much larger concept of a phase categorised by our starting to bear fruit of various kinds. I am not a gardener but it feels to me like caring for a shrub. You need to prune or else the bush grows rag-tag and the flowers and fruit will be small and weak. Pruning is painful, we are cutting parts of us away after all. Whenever we bring something forth, something we love and have laboured over, a meal, a hand-made gift, a poem, a child, this is being a mother. And I have laboured over the poems in this section, both in the writing and in the experiences gathered.

“Crone” perhaps the most offensive of the three (unsurprisingly, as she is the most powerful). The woman who has ceased to bleed, who has gone through the threshold of menopause and into the beyond. What is a crone if not an old shrivelled woman, invisible to all apart from those who cross her, who she then curses. A horrible reminder that we are not immortal and one day we too will shrivel and then die? Or, is she a wise woman, with knowledge and experience gained over years of learning and creating? Through the process of editing and growing will never be done I feel this is our most powerful phase where we can find our deepest self knowledge. In this section are poems about growing older and of supporting at births, something that I have been truly privileged to experience through my doula work, and traditionally a role of the wise woman/ crone.

And what of “Other”. The other is everything which is not the thing, the outside, the shadow, the woman, the minority. For me and many this can be read as all experience outside of white middle-class straight cis-male point of view. Of course this is simplistic, but it is this sense of being outside, of being not the centre that forms part of my truth as a woman. The poems here are SPECIFICS.

I hope that you enjoy what you find here. Some of the poems work best on the page, some are better read aloud. If you would like to hear me reading them you can find that on my YouTube channel.